Costa Divina: an alternative base to experience it 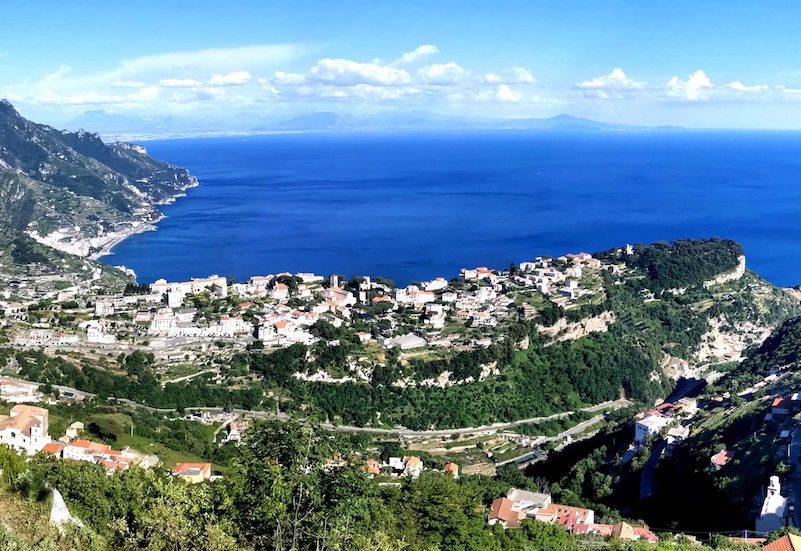 The Amalfi Coast is one of the most stunningly beautiful and dramatic meetings of land and sea on earth. From viewpoint resorts a mile above the jagged shoreline, a great vista of precipitous, splintered rock, miniature villages, beaches, coves and sea like tinted glass has stirred the emotions of great writers and artists for generations.

It’s sobriquet – “The Divine Coast”– is in no sense an exaggeration for what is an extraordinary, transcendent blend of sharp contrast and beguiling natural harmony, vivid and subtle colours, man-made structures and seemingly infinite, unearthly space in the graded blues of the merging sky and vast expanse of the Mediterranean.

All along this littoral, a narrow road – “The Amalfi Drive”– connects a string of ancient port-towns, beach resorts and fishing villages between the coast’s end-points of Salerno and Sorrento, just over 40 kms. of endless hairpins and zigzags. The road has been laboriously hacked out of the steep granite and limestone rock-fall over the centuries since the original Greeks and Romans and might be said to remain more or less engineered for ancient transport – still no wider in places than a pair of donkey carts.

Immediately above the coastal strip, the mountainsides are often covered with lush natural woodland, notably the icon Mediterranean Pines with their strange bouffant bonnets, or they are scored with dry-stone terraces for smallholder cultivation of mainly lemons, oranges, olives and vines. In places, fields and screes of bare rock and sheer cliff-faces appear from a distance like disfiguring pale blotches on the deep green landscape, but in the changing light of the day they too contribute to the beauty of panorama with ever-varying watercolour tints, from pale yellow to subdued shades of salmon pink, carmine and purple.

People have built there houses everywhere on the mountains, even on the higher reaches. They cling precariously to the slopes, sometimes scattered like herds of grazing sheep and elsewhere huddled on top of each other in what has been likened to a petrified white and pastel cascade.

On the seaboard itself, the resort towns and villages are also steeply banked, most spectacularly at Positano and Amalfi. All of them have individual and distinctive characteristics. Vietri-sul-Mare in the south if noted for the artistry of its ceramics, nearby Cetara is a close-knit fishing community, and still going north, Maiori has the longest beach and hotel-lined esplanade on the Amafli Drive. Its smaller sibling, Minori, is also well endowed with visitor attractions and amenities, including an ancient “Villa Romana”and excellent restaurants specialising in seafood and Neapolitan cuisine.

For many, the surpassing attraction of the entire coast is Ravello, up on the heights – the famed “Citta di Musica,”more accurately the large, still mostly medieval “Village of Music”where every year, over the month of July, some of the world’s most famous orchestras perform on a platform suspended from a cliff-face above a sheer drop to the sea.

Ravello has a number of fine hotels and villas, which have hosted virtually everyone of distinction since the days of the Victorians’ “Grand Tour” and Richard Wagner’s discovery of “Klingsor,” his “magic” garden” in “Parsifal,”around the Villa Rufolo. Other names of artistic celebrity inscribed in the hotel registers, at the Villa Cimbrone for instance, are Byron, Ibsen, Andre Gide, D.H.Lawrence, E.M.Forster and Greta Garbo “getting away from it all” with lover Leopold Stokowski. American writer Gore Vidal is an honoured citizen and has a magnificent “swallow’s nest” villa hung from the highest cliff.

Ravello also has six satellite villages, all of them mountaintop retreats for the Roman nobility fleeing the Barbarian invasion at the Fall of Empire. Of these, the first was Scala, partly obscured from detection at sea by a mountain bluff, which claims the oldest of the coastal Christian churches and has saintly associations in Fra Gerardo Sasso, founder of the Knights of Malta, and St. Alfonso, founder of the Catholic Redemptorist Order. Today, Scala is the set-off point for hill walks and mountain treks into a nearby forest park

Directly below the hamlets is Atrani, a picture-book fishing village – the smallest in Italy – and Amalfi, the proud, superbly appointed tourist port-town, focal point of the coast that bears its name and one-time capital of a fully-fledged Maritime Republic.

On then to mythological Positano, where Odysseus survived the fatal harpy lure of the Sirens on rocks off the shore, where Fellini’s Dolce Vitacrowd flew in for weekend parties in the 60s, and where film director Franco Zefferelli still has his preferred residence. Positano is a truly fabulous resort, which according to Ivana Trump has the “world’s best hotel” in the San Pietro. It also has innumerable fashion boutiques for the distinctive “Moda Positano,” which the smart set says is more exclusive than the vaunted haute couture of the Vias Frattini and Condotti in Rome.

Out of Positano, there’s a further 18 kms of the scenic drive around and across the Sorrento Peninsular, eventually to the famed ballad town of the tenors, the off-lying islands of Capri and Ischia, and finally to Naples, which, so they say, everyone “must see – and die.” For many, however, the romantic imperative is further south!

Overall, the Amalfi Coast is a unique holiday destination – for its mix of spectacle, light and air, still blue Mediterranean, antiquity, artistry, and entirely modern “creature comforts,” not least the fresh, natural foods from the sea and countryside and the local bevandethat goes with it – fine wines, many quality designated “DOC” (Denomination of Origin Controlled) and “Limoncello,” emblematic liqueur of the lemon capital of the world.
So many memorable sights and sensations. Little wonder, then, that this coast is popular, increasingly so to the point that for much of the year – spring, summer and early autumn – the demand for hotel beds often exceeds the supply.

For this reason, we offer an alternative – a new development for this part of Italy – of B&B or private apartment accommodation, with or without self-catering facilities. And for some, we’re sure, we are actually offering a preferred base for visitors to experience and enjoy the Amalfi Coast – closer to the people and culture, and at comparatively modest cost.